(Part of a series explaining the history behind my Texian Tees. Other entries: the De Zavala Flag; the Burnet Flag; the Gonzales Flag (Old Come and Take It); and the New Orleans Greys Flag. Click here to see and buy the shirts!)

A young woman in Georgia made this flag bearing a blue star for a battalion that was heading to Texas in response to a call for help. (It’s more often pictured with the words “Liberty or Death,” but I preferred using the version that names Texas.) James Fannin flew it — or actually, the shreds of it — at Goliad as the “first national flag of Texas.” Many of the Georgia troops in this battalion were killed in the Goliad Massacre, but as the Handbook of Texas notes, not entirely in vain: The executions ordered by Santa Anna bolstered support for Texas independence.

The flag has a dramatic position in this painting of Santa Anna’s surrender, which has been hanging in the Texas Capitol since 1891. 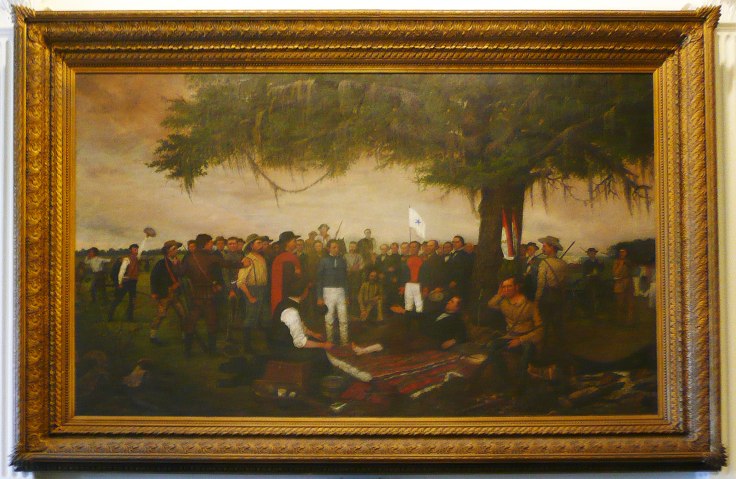 (That’s Santa Anna in the blue coat and white breeches — a private’s uniform — and an injured Sam Houston lying on the blanket.)

About my design: Troutman probably appliqued the blue star on her flag; my design, like my other shirts, shows an embroidered star instead. This gives a richer and more detailed look, but at full size, it would have been so heavy the flag probably wouldn’t flap! Also, as noted above, the original flag likely read “Liberty or Death,” but I thought most Texas history fans would prefer to wear a shirt with this slogan, which is also sometimes given in descriptions.

Short link for this entry: http://bit.ly/troutmanflag

One thought on “The Johanna Troutman Flag”