Compared to the stars, blocks of color and occasional cannon of other early Texas flags, the San Jacinto flag is a complex mass of symbolism. Here’s a reproduction (which I have kinda brightened up) of the image at the center of the actual, refurbished flag, from Robert Maberry’s 2001 book “Texas Flags”: 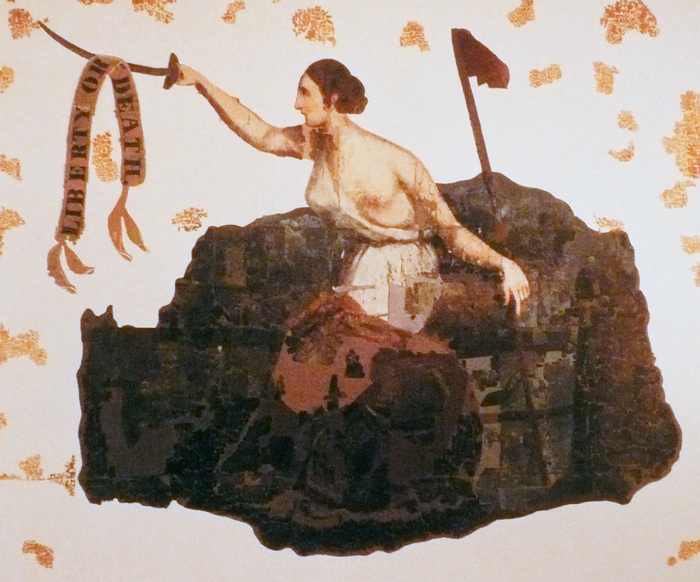 It’s clear that the image carries special meaning, but to modern eyes (at least mine) it’s not clear what. Well, the sword and the “Liberty or Death” motto are pretty unambiguous. But what’s the lumpy red thing on the spear, and why is she crouching, and who is she?

You can make out a shield at bottom right, which Maberry says is decorated with wheat sheaves and a plow. Clear enough, that’s for the settlers and farmers.

The red doohickey on the pole, Maberry says, is a Phrygian-style liberty cap, and after some research I have concluded that our Revolutionary forebears would burst into tears if they knew their descendants had forgotten what it was. Red, conical, felt. Traditionally supposed to have been worn by slaves in ancient Rome once they were freed. Very big with the Revolutionary Americans, also the French, whose “Marianne” wears one. It gets a nod in “Rip Van Winkle” (1819), where it’s referred to humorously as a kind of “red night-cap” atop a pole in such a way that it’s clear Washington Irving expects everybody to get the reference.

This led me to a path of research that showed me just who the lady is, and why she’s sitting down. She’s an Americanized version of “seated Britannia,” a traditional depiction of a goddess who embodies Britain, but who actually goes back to the days when the Roman empire had just slapped a great big wall across the island. Emperor Hadrian’s coins first use seated Britannia to represent Britain — a military province, as shown by the shield and spear — perched on a rock, possibly to show subjugation to Rome.

This image was recycled in 1672, when British coins of Charles II picked up the image of Britannia as a goddess with spear and shield, even keeping her seat on the rock. (The design was modeled directly on the Roman coin, using an image of a Scottish lady Charles II was lusting after.) She was used continuously on British coins for the next 300 years. In 1835, an American artist gave her a Yankee makeover with stars, stripes and the revolutionary hat on a stick. That image was used on U.S. coins from 1836 to 1891. Since James Henry Beard is supposed to have painted the San Jacinto flag in 1835 for Kentucky volunteers headed to help Texas fight Mexico…  either two artists had the same bright idea at the same time, or somebody’s got their dates mixed up. Our flag’s been repainted and refurbished a bit too much, so maybe somebody did the most recent repaint with a half-dollar in their hand. (Other versions do show up now and then.)

The visual evidence is compelling: This is a design that has pretty much been standardized since about 134 A.D.

So there you have it: She’s a British (or Scottish) babe on a Roman rock, carrying an Anatolian hat on a stick. With perhaps a slightly French attitude toward upper-body clothing.

In case you’re wondering (I started to), the Statue of Liberty is sometimes said to be a depiction of the Roman goddess Libertas, but she was originally conceived as a colossal lighthouse in the form of an Egyptian woman with a torch, to stand on the Suez Canal. Egypt couldn’t afford her, and in 1870 Auguste Bartholdi retooled his plans, making her a gift to America. She was dedicated in 1886, and at least one source says she’s not wearing a Phrygian cap because it was a little too radical for the times, which saw a fair amount of monarchist sentiment going around in France.

And speaking of inspiring women, I cannot say enough about the knowledge and helpfulness of Dane Kurth, whose website www.wildwinds.com is a fantastic reference and a wealth of information on ancient coins. She tells me, “This (seated) figure of Britannia — as well as most of these female personifications — all hail from ancient depictions of Athena… Britannia, America, France, Italia etc… even Roma – all the same person, basically.” Thank you so much, Dane. Viva Helvetia!

One thought on “What’s a British goddess like you doing on a Texas flag?”