Sewing is, by some estimates, 45,000 years old. Sewing is older than cloth, but not as old as clothes: First we wrapped ourselves in hides, then we tied the hides around ourselves with cords or sinews, and eventually we poked holes in the hides and started running cords through to hold the pieces together.

After another 5,000 years or so, we came up with needles. Another 10,000 years, and we started rolling fiber together in our fingers to make string. That gave us the basis for cloth, which we began weaving on looms about 27,000 years ago. We’ve had scissors for a couple thousand years.

IPads are about six minutes old. You can point an iPad at the night sky and it will recognize the stars and planets from your location and tell you which ones they are. Wouldn’t the cave people have loved it?

This week, an idea that’s at least a few centuries old helped me hand-sew a simple iPad sleeve. Saddlers and other leather-workers use a device called a stitching horse to clamp thick layers of leather together and hold them steady while they poke holes and stitch the leather. I wanted to make my iPad sleeve from 5mm neoprene, which is thick enough to mess up my sewing machine, and I foolishly decided to use a pretty, contrasting thread, which would really show my usually sloppy hand sewing.

It came out fairly even, though: 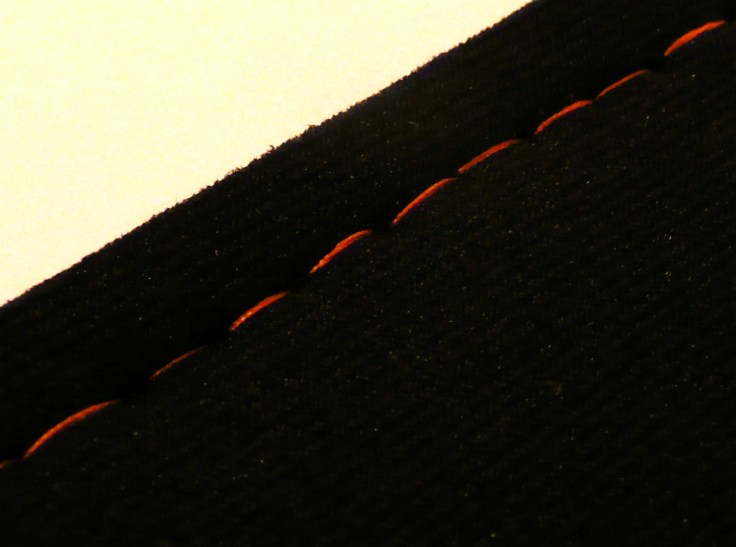 What I did was clamp on a couple slim pieces of wood, which held the thick fabric in place but also gave a straight edge to guide my needle. This is basically the clamp idea from the top of a stitching horse. (The stitching horse includes a stool or bench to sit on; a stitching pony is the same thing but without a place to sit; so I dub this … a stitching jenny!)

Basically, I cut a 10.5″ by 16″ piece of black neoprene, folded it in half to make a 10.5″ by 8″ rectangle and then sewed the two short ends closed.  (I learned, too late, the cheapest way to get a small piece of neoprene is probably to find and cut up an old laptop sleeve or wetsuit.)

I made my seams about a quarter-inch from the edge. Neoprene is stretchy, which gives you some margin for error in fitting around the device, but still, measure carefully. Another great thing about neoprene is you don’t have to finish or hem the edges, which makes this project real easy.

You can see there, the wood is thick enough you can kind of lay the needle flat along it. This means you’re coming in at the same angle, along the same line, every time, which helps a lot. I did a simple running stitch all along one side (like this: —   —   —   —   –) and then took off the clamps and sewed back the other direction to fill in the gaps (–––––––).

Gave this one to my buddy @omarg for his wife! They’re sweet folks — who let me play with their brand new iPad. Thank you both!